Gathering Around The Bookish President 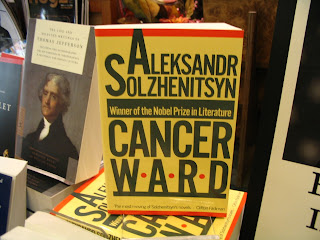 Happy Inauguration Day! I'm psyched that at the last minute we've decided to screen the event at McNally Jackson. It's the sort of thing you want to be around other people for -- the excitement just isn't the same by oneself. I'm also pleased that those who come to the store will get a chance to take a look at the new display some of our staff have been working hard to compile. Titled "How History Was Made: Books That Inspired A President," the display encompasses two groaning tables of political theory, fiction, history, memoir, and classics of world literature that make you wish you'd taken more cross-disciplinary critical thought-type classes in college. The books come specifically from a period in Barack Obama's 20s when he read voraciously and when much of his political thought was formed. My coworker John McGregor has done a ton of research to put this together, and it shows. Starting with Laura Miller's Salon article "Barack
1 comment
Read more
More posts