January 14, 2008
You may have already seen this, but the ABA has officially announced that 115 new independent bookstores opened in 2007! Apparently, it's the third year in a row that we've seen over 100 new store openings. You can look here for the full list of new stores -- -- there may be a new indie store near you. I found 4 of them just in the five boroughs of New York -- woo hoo! I'll have to update my own ongoing list of local indies, which is currently pushing 70 -- I love to pull it out whenever anyone laments the fact that there are "no more independent bookstores" in New York, and we often use it at my bookstore to refer customers looking for something specific. Now they've got even more options.

And more folks are discovering that's the case. In the Huffington Post last week, Michelle Haimoff writes about seven great New York indie bookstores, which she calls "The Secret New York Alternative to Barnes & Noble." McNally Robinson gets a nice mention, as do some of my other favorites.

(For another fun list, check out the (very subjective) Top 10 Bookstores in the World by Sean Dodson in the Guardian. What a travel itinerary that would be!)

Also in our fair city, Book Culture (formerly Labyrinth) has a new blog. If I recall correctly from my days working there during the coursebook rush, the Seven Shopping Tips for Students will be especially helpful (not least to the harried staff!) And the store's new events and marketing manager Kelly Amabile also has her own blog, with reflections on a life in books and working in an indie bookstore.

And it looks like 2008 is going to be another good year for indies. The ABA blog led me to Justina Chen Headley's Five Ways to Support Your Local Bookstore, inspired by the closing of her local Seattle store M Coy, and picked up by a number of other bloggers. It's another indication that consumer awareness about supporting indies is on the rise.

But also check out this letter to the Seattle Times from the very succesful Seattle Mystery Bookshop, objecting to the way M Coy's closing was covered in the media (thanks to Shelf Awareness for the link). It reads in part:

The local media are quick to mark the demise of an independent bookshop and say once again how it is nearly impossible for a small independent to survive. Difficult, sure. But not impossible....

If you want to know how independent booksellers really are doing, come ask us. Reacting to the closing of one bookshop by saying it is another death-knell of an industry simply isn't fair or correct and can be counterproductive. It can also mislead customers and drive more into the hands of the corporate Big Boxes, encouraging the difficulties that small independents face. Why not do a story about how some independents are doing fine because of their customers who want to support small businesses? Isn't there a story in that?

Based on the stories I've been discovering this week, clearly there is!

Do you have any good stories? What are your hopeful signs for the new year?
bookstores in the news good news new year New York

Old First said…
If McLuhan is right, that new media do not replace old media, but supplement them, the same may hold true for markets; big box stores may at first threaten small stores, and may cause a shake out, but they will never replace them.

People eventually discover what they CANNOT get at Barnes and Noble.
12:22 PM

P. J. Grath said…
My little Dog Ears Books, with its almost unbelievably modest beginnings, will be 15 years old on July 4, 2008. When people ask, "Can you really make a living?" I tell them flat-out, "I don't have a trust fund. If this place doesn't make money, it won't stay open." So far, though, it's been open for a decade and a half, and I call that an enormous success. Never easy, but clearly possible!
8:18 PM

JohnFox said…
Ah, the logic of optomism. But doesn't pessimism sell so many more papers?
2:20 AM 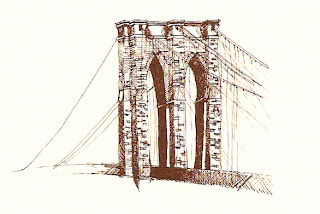 Sorry about the lack of post on Friday -- the day got crazy, as is likely to happen more often as the wedding date (June 30!) approaches. I'll give a shot at recapping my BEA, with some extra linkage for fun. Wednesday Joined the rest of my fellow booksellers at the Brooklyn Marriott for a celebration of Brooklyn . Saw my old boss and mentor Toby of Three Lives and other familiar faces. And David McCullough's opening address -- man can that guy write. The author of 1776 and The Great Bridge expounded upon his own writing career, the Battle of Brooklyn, and the moment he knew he wanted to write about the Brooklyn Bridge. His previous book about the Johnstown Flood had been about the worst of humanity ("just because people are in positions of responsibility doesn't mean they're acting responsibly" he observed, presciently), and he wanted to write about the opposite, a great effort of idealism and civilization that succeeded. The bridge, he postulates, is suc
Read more

Book Nerd
I'm the co-owner of Greenlight Bookstore, with two locations in Brooklyn, NY. I live in the Fort Greene neighborhood of Brooklyn with my equally book-obsessed husband and daughter. I've worked in bookstores for twenty years and owned one for twelve; I love the work but sometimes I need a break from it, which is found in the books themselves.