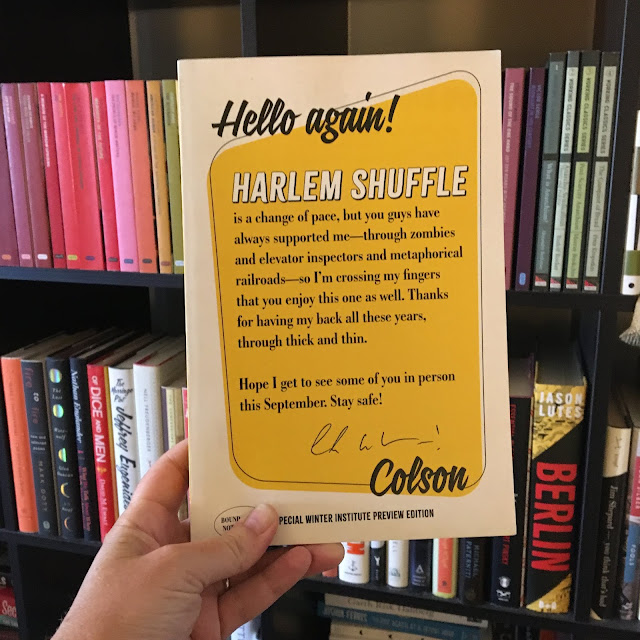 Like every other bookstore I've spoken to or heard about, Greenlight has spent the past year and a half of pandemic-era retail in a state of near-constant reinvention.  I could talk about the moment-by-moment agony and uncertainty of it, the second-guessing and the exhaustion of decision making, but in retrospect it looks like a rollercoaster that you managed to stay on.  We were lucky we already had an e-commerce website -- we just had to reallocate a ton of resources to expand it it. We were lucky our stores are in dense residential communities where folks weren't going in to the office -- sales in some categories actually grew (and we sold a lot of puzzles). We were lucky to have staff and customers pushing us forward as we examined our own institutional structures -- we're in a still-very-ongoing state of becoming a more transparent, more inclusive business.  It takes a kind of gallows humor to see it, but the hustle that has been required to keep our little bookstore's head above water has made for some interesting new moves.

And there's been a lot of self-reinvention too. It's been fascinating to see how many indie bookstores are being opened, bought, and sold, as folks decide what to do with their lives. Our bookstore staff have taken on new roles in the store, or have moved cross-country to be with family to pursue another dream. As owners, my business partner and I have both had moments of realization that as much as we love buying inventory (her) and running events (me), it's just not possible to effectively do that kind of operational role and also run a store our size -- so we've reorganized again, training up new talent both internal and external to take our business into the future.

Here's a forthcoming book about hustle and self-invention, from an author who read at Greenlight before there was a Greenlight. See, even the future's not all bad.

Colson Whitehead, obviously, can do anything he wants. Not just that he has permission, because of all the awards and the TV shows and stuff; he actually has the power, though he holds it lightly.  With this book, apparently he wanted to have some fun.

The only contemporary literary master who has written a zombie novel this time is exploring another genre: the heist film, though the hero is a character who's typically a side character in the heist: the fence, the guy who has to find a way to sell the stolen goods once they're secured.

I have a super soft spot for Ray Carney, because he's a small business man, running a furniture and appliance store in 1960s Harlem until a ne'er-do-well relative (or two) forces him to get a little more creative with some of his contacts.  I love that Ray is genuinely delighted when he gets a young couple the living room set of their dreams, while he's also trying to move into a better apartment, take care of his wife and girls, impress his snobby in-laws, educate himself on the resale value of gemstones (professional development!), and not get caught out by either cops or gangsters while just being ever so slightly crooked.

Underground Railroad and Nickel Boys, Whitehead's last two books, brought deep historic injustices to light, and they were necessarily painful at times to read. In Harlem Shuffle, the violence and evil of racism are mostly a low background hum, and the focus of the story is on the struggles and shenanigans of Ray and his Black colleagues, above board and below. Just like Zone One had all of the satisfactions of a zombie story but much richer, this one has all the satisfactions of heist story, or rather three of them, as the story is structured in three semi-freestanding sections almost like novellas. Even when things go wrong in a carefully (or not) executed plan, the trouble is balletic, kung fu-like, playing out with such a beautiful comedic grace that you want to read certain set pieces out loud.  It's also a gorgeous and nuanced panorama of 1960s Harlem, with classy hotels and low-rent joints, private social clubs and street music, and the banter and dialogue that Whitehead is so good at.

Like Jennifer Egan's forthcoming novel, this book seems to want to give the readers and the characters something nice to make up for all the trouble they've seen.  There are enough moments of darkness, sociological and existential, that the humor and joy of living seem well-earned. I'm grateful for the hours I got to spend in this world, and some of the moments and characters will stay with me.  Looking forward to sharing this with die-hard Whitehead fans and folks just looking for a good read for the holidays.